Since the beginning of Pixar studios, at the heart of this organisation was the reinvention of animation and imaginative storylines. Cars was a fascinating world of cars living out their lives on an earth where only cars exist. In 2006, the legendary producer and director John Lasseter brought to life the iconic figures of Mater, Doc Hudson and Lightning McQueen. Lasseter has gone on to not only redefine animation, but to reshape the Disney Animation department into the powerhouse that is was for generations. Pixar has suffered through with minimal original titles and a multitude of sequels that pale in comparison to the originals. Cars 2 is considered to be a critical failure, but it did keep the franchise humming around the track. When Pixar announced the production of Cars 3, the question was if the studio could reconstruct the engine of this franchise and deliver a Piston Cup winning film with this lap around the track?

From the opening of Cars 3, things seem familiar in the world of Lightning McQueen and his faithful followers. He is out on the track, continuing to be the champion race car that audiences have come to know over the past decade. Then a new breed of racer shows up on the oval. Jackson Storm (Armie Hammer) represents a new generation of cars who have specialised training on simulators, individual trainers and technologies that have left cars like Lighting behind. After sucking the fumes of defeat after losing to Storm, the veteran racer experiences a horrific accident and eventually goes into hiding. Eventually, he convinces himself to reenter the racing circuit and with the backing of the new Rust-eZe owner, Sterling (Nathan Fillion) and under the training of Cruz Ramirez (Cristela Alonzo), he sees his chance to beat Storm. The only issue is that the new high-tech methods do not fit with McQueen’s means of getting faster and he looks for ‘old-school’ techniques to get his racing mojo back. Can Doc Hudson’s (Paul Newman) former team mates and mentor be the key to getting the lightning back in the veteran racer’s tank?

Even though Cars may not have the same emotional elements of Toy Story or Inside Out, it did contain a magic that captured the imagination of all those who dream of race cars coming to life. First-time director and co-writer Brian Fee has managed to recapture the magic of the inaugural film and put this franchise back on track. The characters of old provide the nostalgic components and the new players proved the new oil to get this engine running again. Pixar continues to set new standards for animation and even though the story line was predictable, it did deliver the sentimental undertones that help to differentiate these films from other studios. Some of the scenes seem so real, it is hard to believe this is animation.

The challenge that this film faces is determining what age bracket that they desire to reach. The characters and the marketing set up a film for the younger viewer, but the story is about an ageing ‘athlete’ coming to terms with his need to consider the next season of his life and career. It takes contemplative and thought provoking paths that keep most of the ride far away from any racing. Which may cause most younger viewers to lose focus, but may capture the heart of the parents who may be considering some of the same questions in their lives. Unlike the team at Illumination who recently released Despicable Me 3 which seems to want the kindergarten crowd, Brian Fee and Pixar have delivered a mature story about animated race cars who are wrestling with some of life’s bigger issues. This does not detract from the value of the film, merely may cause this film to lack the same appeal for the target audience of younger boys.

The overall experience was a visual spectacle that led to a vast array of unexpected introspection. It was good to see this franchise to get back on track, but the hope was that they would choose to allow this series to go out a winner. Like the story-line goes, look at retirement as not an end, but making room for new blood to enter the race. To the Pixar team, allow this franchise to speed off into the sunset. 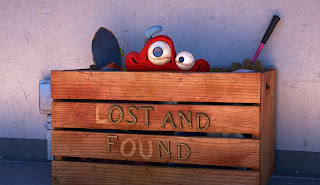 One of the best elements of most Pixar films continues to be the introductory shorts. Lou is no exception, this heartwarming film about a ‘creature’ that inhabits the lost and found box at a primary school is a treasure to find. It provides something to celebrate and anticipate for all of the skeptics who may be weary of Cars 3. All ages will be wrapped with attention at the story of the school bully who’s life is dramatically changed by this unique creation. Warning: Lou is only five minutes long, but it does deliver Pixar’s trademark emotive moments that will require tissues. Mum, come prepared.

What should parents know about Cars 3?

This is a film for all ages, but if the screening we attended provided any insights, this is not going to capture the hearts of little ones. When the cars were racing on screen the audience was fully engaged, but throughout the more contemplative moments, most of the young ones lost interest. It does not contain any objectionable material, but the themes were a bit too mature to keep the younger set’s attention. This is a lesson in disconnect between the marketing and the intended audience.

Bigger questions to ponder from Cars 3

Grey hair is a crown of glory; it is gained in a righteous life. – Proverbs 16:31

It is interesting that a children’s film would provide a lesson in the value of the ageing process. In Cars 3, Lightning McQueen must come to terms with getting old. His glory days are behind him, but that does not mean that he offers no value to his community. It merely means a new season of life. The Bible is filled with this example. Moses, Elijah, Peter and Paul all proved the example of how we can be utilised throughout our life. Each stage of life presents an new opportunity to serve God. So, what season of life are you in and what are you doing with the life you have been given?

Reel Dialogue encourages parents to be active participants in the entertainment choices of their children and discuss with them the lessons that they can learn from these films.

Over the past two decades, Edward Norton (Fight Club) has wanted to bring Jonathan Lethem’s award-winning novel, Motherless Brooklyn, to cinemas. As the writer, director and star of the...

What makes a film great?

A question that I get asked regularly throughout the year is what makes a film great? This is a daunting question to answer, but one...

The Uncoupling: How to kill Harold Crick and my Apple watch

One of my all-time favourite comfort films* is Stranger than Fiction. This is the under-appreciated story of Harold Crick (Will Farrell), an I.R.S. auditor who begins to...

The SomeAnswers podcast – The sequel in isolation

Don't worry this picture was taken in 2019... before isolation issues. Relax!! Click here to listen in on the conversation between Samantha Freestone & Reel...

Small films that deserve the spotlight

The Reel Dialogue team loves to discuss all things film and one of our favourite conversations to have with people is about their comfort films. ...

You may have missed